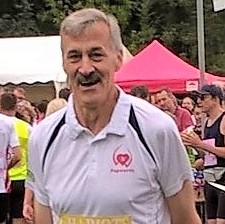 My Bryson Line walk will be powered by an incredible gift that I received four years ago at Royal Papworth Hospital – a new heart.

It still surprises me to say that I’ve had a heart transplant because, until 2011, my health had always been great and I was a fit marathon runner. But suddenly I found running to be hard and soon it became a major challenge just to climb a flight of stairs. It turned out that my heart muscle was disintegrating due to a previously unsuspected genetic defect. What’s more, there was no medical treatment that could stabilise, let alone improve, my failing heart.

So I was put on the waiting list for a heart transplant at Papworth, the UK’s leading heart and lung hospital. The doctors advised me that the shortage of donor hearts meant that it could be a long wait and, indeed, that a heart might not become available in time. Sure enough, a year later I was still waiting. Shortly after that, my heart became so weak that I was confined to a bed at Papworth. It was a terribly difficult time for my wife and three children, but they were incredibly supportive and kept me hopeful.

Then, at 2:00 am on the night of 13 August, 2013, a transplant coordinator gently woke me   in my darkened hospital ward and said words that are burned into my consciousness: “Wake up, Eric. We think we’ve found you a heart.” After final checks on the heart and a quick good luck from my wife and 26-year-old son, I was rushed into an operating theatre. Twenty-two hours later I was awakened again – this time with a new heart and a new life! I wish I could explain what it was like, after two years of barely being able to detect my pulse, to feel a strong heart beating in my chest again.

I now have an amazingly normal life. I can run again, albeit slowly. I feel like I could walk forever – a feeling that will be put to the test by the Bryson Line! I have the great pleasure of helping out with my six grandchildren, all born since I went on the transplant waiting list. For all of this, I’m endlessly grateful to the family of my donor, who were so generous at a tragic time for them, and to the doctors and staff at Papworth, who took such expert and compassionate care of me.

I’m walking the Bryson Line because I want to raise funds that will give more people the second chance at life that I’ve been given. Papworth Hospital is doing globally pioneering work to significantly increase the number of hearts available for transplants by using a category of donor hearts that couldn’t be used in the past. Unfortunately, the NHS has not been able to fund the additional expense of this new procedure, so the funds must be raised through charitable donations. I’m also hopeful that my walk will encourage more people to register as organ donors and, crucially, to discuss their donation wishes with their families.