Day 30 finally arrived. After 29 days of early starts, hotel breakfasts, packed lunches and pub dinners, three tired walkers awoke, knowing that they only had 11.5 miles to walk, from Arundel to Bognor Regis. It is hard to describe the feeling: anticipation, nervousness, sadness that a hard challenge was coming to an end and that one would not be walking tomorrow, tinged with relief. We had, after all, made it. Nearly.

Today we were being joined by over 60 other walkers comprising colleagues, friends, family and a large number of American’s living in the UK who had responded to a call via US university alumni networks to join us. A slightly later start allowed people to gather and for the core walkers and Bill Bryson to meet with Councillor Lucy Ashworth, the Mayor of Arundel. Lucy, a keen charity supporter herself, ensured we got a good picture in front of Arundel’s famous castle before waving the walkers off.

Another hot day was made bearable by the knowledge that we would pass a couple of cafes and that we would only be walking for 5 hours at the most.

The core walkers were carried along on a wave of conversation and good will. We were joined by our youngest and oldest “Liners” as anyone who has Walked the Bryson Line was becoming known and a few dogs. This also included Crispin Truman, the CEO of the Campaign to Protect Rural England, who’s team had made us feel so welcome at some many points during our journey through England.

We followed the River Arun

for a good 6 miles before turning right at Littlehampton, through a marina and gold course before reaching the coast.

Even this far South, as far as we could come, paths were still overgrown with the walkers twin curses: nettles and brambles. But these would not stop us today.

who joined us for the final mile. It was a happy band of Liners, therefore, who were greeted by Councillor

Stephen Reynolds, Mayor of Bognor Regis and Mrs Jane Smith, Town Crier for Bognor Regis who had prepared a special announcement for us!  We are very grateful to both Mayors for giving up their time to meet with us at both ends of our last day.

So, we made it down the Line. It was challenging, physically and mentally. We made a lot of friends.  We saw parts of our wonderful United Kingdom that we had never have had cause to visit. But most importantly, we raised a healthy sum for five wonderful charities.  Thank you, thank you, to everyone who made a donation, who supported us, who helped us in any way large or small. It has all been gratefully received. Thank you. 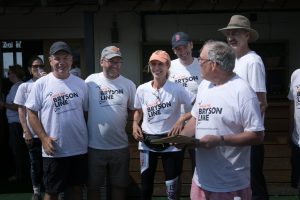