Winding Our Way Down the Thames

Following an interesting night in a guesthouse in south Oxford and a wonderful meal at the Magdalen Arms we gathered together to head to the Thames Path and the next stage of our walk, today ending in Shillingford. The core three walkers were joined by Hilary, Nick and a returning Ruth together with Tanager advisor Abbas.

We set off at a cracking pace with no sign of any elevation ahead. The difference being that right from the start we had a wonderful breeze and, for a pleasant change, paths that were (well at least in the beginning) not overgrown with briars and nettles.

Making good progress we settled into a rhythm crossing locks and bridges as we walked towards Abingdon.  Thankfully, this morning after a week of blue sky, we had some cloud cover and really, I mean really, enjoyed the cooling effects.

We walked past weirs, locks, rowing clubs and amazing properties. Whilst we missed big vistas, hills and rocks we were lulled into a steady rhythm by the pace of the river and all that it had to offer.

Aside from the general curving nature of the river we came across people repairing the bank, cows lying in the grass for lack of shade, lines of geese and swans cruising, red kites circling above and, our favourite feature of any water course, bridges.

Eric, the Architect, would have rejoiced at the variety and style, each providing character to the landscape. 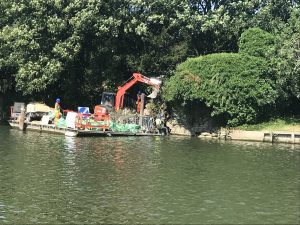 One forgets that the river is also a major waterway and we passed many narrow boats and pleasure craft as well as eager young rowers. The intersections

with canals also reminded one that the Thames was once a great thoroughfare moving goods and people long distances with relative ease.

Sadly, we found that may parts of the Thames path were overgrown and we spent some time picking our way through nettles, brambles, thistles and all their relatives. Such a shame. Much is made about walking the Thames Path and there are many events that focus on following the Thames Path so we were surprised at just how overgrown it was in places.

We even encountered a runner (if he ever reads this, which he won’t) who ran through us whilst we were negotiating a particularly nasty part of the path. Without apology he pushed at least two of our party into brambles without so much as an apology. No idea where he came from but it made me sad to be British at the thought that it could have been a Brit who had done this.

If only we could have moved with similar relative ease. At the end of today, Day 25, completed in near record time, we gratefully sank into chairs to watch the latest world cup game.

With massive thanks to our walkers today for pushing us along and giving us a bit more time this evening.