One bright morning in mid December in 2012, while shaving I noticed I had a bump on the left side of my neck.   At the time I had been feeling under the weather and assumed it was simply swollen gland related to a cold.

I am a bit of a momma’s boy.  When your momma is a nurse, that doesn’t help because you can run to her with any ailment that you have.  I spared my mother the details of this latest ailment because, well, I had recently turned 36 and more importantly she along with her siblings were tending to her mother, who was in her final weeks of her life.

Christmas came and went. Sadly, my ‘grammy’ passed away.  I was now having night sweats, which I assumed a positive sign of my cold breaking.  I decided to get my neck checked out in the new year.  Off I went to my primary care physician.  She said that I was probably correct in that it was a swollen gland from a virus but just to be sure, I should go and see an Ear, nose, and throat specialist. 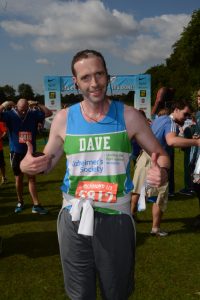 Couple weeks later, I was with the specialist and he echoed the same.  My primary care doctor is probably right but lets do a needle biopsy just to be sure. Then he said something I will never forget and I quote.  “ Do not worry about this David, this is not cancer.”  With that assured I booked the procedure and went about my day.

February. Day of the procedure. No big thing. Stick a needle in your neck and go back to work; results in a week.  Results: “look good but there is something that although does not cause alarm, I would like to have a better look at.  Let’s take the whole thing out.”  Not a problem, surgery scheduled for mid-March.

Day of surgery I took a taxi through a Boston snow storm to get to hospital for 6 AM.  Surgery done and I get a week off.  Just so happened that the week off coincided with the Men’s NCAA basketball tournament. Happy days.

Two weeks later, I am back to the specialist armed with a new and cool neck scar, a cup of black coffee and the knowledge that I do not have to worry because this is not cancer.  I was so confident, dare I say cocky that I did not sit down in the office.  I had a full day of meetings lined up, so I said something to the effect of give me the good news and I am out of here.”  The surgeon said,  “David, please sit down. I do not have good news you have lymphoma.” Next he said a bunch of words and phrases I did not understand.  I did understand that I needed to get to work on choosing an oncologist and team.

I went to work.  That evening, I went to meet a new client whose wife had recently passed.  What he said next is entirely true. In recanting how his passed away he said. ‘She fought through it all but in the end, it was the Lymphoma that got her. The timing for that story was not great.

I told my family. We all cried and asked questions to which we could not possibly know the answers.  Meanwhile I got some referrals and decided on my team.  Dr. Hamdan and crew from Beth Israel Deaconess Medical Center in Boston.

I had a PT scan to determine the scope of the cancer.  I learned that I am not claustrophobic thankfully. Would hate to do that if I was afraid of enclosed spaces.

They only time I was really scared about this situation was the night before I got the results of the PT scan and the moments immediately preceding getting the results.  Every time I saw a pair of shoes in the crack between the floor and the bottom of the door to the examination room, I had a nervous breakdown in anticipation of those shoes coming in the room to tell me the bad news.  It turns out the shoes and the doctor walking around in them did not have bad news.  As he put it “Lymphoma sucks. With that as a baseline I have positive news.  You have Stage 3 Grade 3B Non-Hodgkin’s Lymphoma.  It has a cure rate in the high eighty percentile.”

My treatment was to be 6 rounds of chemotherapy, which I would have started that day if I could. Since that they were booked up that day, I had to wait a week or so.

April 12, 2013.  First day of chemotherapy. From the receptionist, to the phlebotomist, to person who checks your vitals, to the nurses that hook you up to poison,  everyone and I mean EVERYONE could not have been nicer.  It sounds odd but I really liked going in for treatment. I instantly felt comfortable there.  I started and never finished 5 jigsaw puzzles as well as ate some terrible turkey sandwiches and potato chips. I am off Wise brand potato chips forever.

I did not do well with the Rituximab.  I broke out in hives.  I was given an antihistamine but it was too late.  I would have to have my first treatment cut short and come in the following Friday.

April 19 2013 – Treatment was postponed again because of the city wide man hunt for the two brothers responsible for the Boston Marathon bombing that shook the city four days prior on Patriot’s Day. The older brother was taken to the same hospital I was having my treatment where he was pronounced dead.

These two stalls to my treatment behind me, I was able to get the remaining five treatments done completed by August and was given the all clear on September 18th 2013.

I felt awful at times, my hair fell out, and I had to stop playing sports but in the end , I was very fortunate.  I had it better than most. Chemotherapy is awful but there are many, many people that have and had harder roads than I.

I am excited to be a part of The Bryson Line walk because I am here, alive, and enjoying life because of the fundraising and efforts of people that have come before me.  Treatment for blood cancers such as Leukaemia and lymphoma have come miles because of the capital that has been raised to pay for clinical trials, grants, and salaries of the professionals that have made it their mission to see these dreaded diseased cured.  Bloodwise understands this and it is why I try to help when I can.

As a team we have completed a number of training walks.  Training for a walk sounds a bit ridiculous on its face and the training walk was not too taxing save for a blister.  Better socks next time, David!  However, the thought of walking 20 plus miles and then waking up and repeating another 20 miles and then repeating that for many consecutive days and weeks makes you realise how much time you will spend on your feet and you cannot simply just turn up on day one without training.  We have some more dates in the diary and will all be prepared with good shoes and loads of plasters!!