Six intrepid walkers (and a dog) met on a cold, but bright, February Sunday morning at Reading station to walk two thirds of Day 26 (in reverse) as a training walk. Today we would follow the Thames path for about 15 miles and the forecast was for cold, but mainly dry weather.

Before we set off we managed a Bryson Line first: our first Victoria Cross (see picture right). 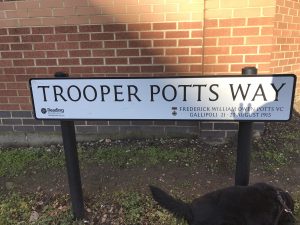 We never imagined when we planned this walk that we would stumble across so many wonderful facts and footnotes to this wonderful country.

We set off from the station and soon picked up the Thames path heading West walking through a large public park and past a number of rowing clubs where brave (foolhardy?) rowers were preparing their boats for training.  We were able to move at a decent pace on a proper hard surfaced path, however, as we left Reading proper, the path changed fro concrete/tarmac to earth, or rather, as we shall now call it, mud.  Despite the beautiful sunshine the river path was benefiting from several months of rain. It is at this point, one mile and 15 minutes into 7 hours of walking, that you realise you are wasting your time tip-toeing around puddles and the usual bogs as you approach gates and stiles. You just have to go through it (as you can see from the next picture).

Still, as we progressed through the mud and, settling into an easy walking pace, we began to enjoy the, quite frankly, beautiful countryside we were 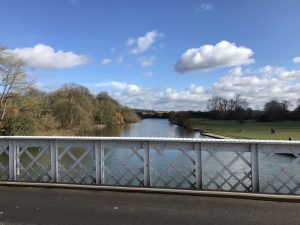 walking through.  We had a short diversion through Purley on Thames as we crossed the main railway line twice and then we crossed the river at Pangbourne crossing a toll bridge at Whitchurch-on-Thames, one of two remaining toll bridges over the River Thames (see right).  Once again we were forced to leave the river as we climbed Whitchurch Hill and then followed a bridle path for quite a distance eventually rejoining the river. As the river once again came into view we were able to catch a glimpse of Basildon Park, now a National Trust property, but formerly an estate purchased in 1771 by Francis Sykes who made his fortune with the East India Company and who built the current property. Even from a mile (or so) away it looked fantastic although any living there today might be a little irritated by the trainline running so close.

The theme of this walk being mud, and having some elevation (both up and down) we slipped and slid our way back down to the Thames and before long approached Goring and Streatley and where we saw The Grotto, a super 18th century mansion built by one of the owners of the aforementioned Basildon 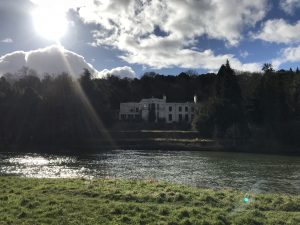 Park for his wife. Sadly dilapidated (and as we now know on the market) this property was used as offices from 1953 and was mentioned by Jerome K. Jerome in his book “Three Men in a Boat”. What a place to work!

It was shortly after spotting this charming property that we experienced a truly Brysonian moment as it began to snow. We could see blue sky, but boy was it cold, and then the white stuff appeared, whipped up by the wind, nearly hail but not quite.  We took time for lunch on the outskirts of Goring not long after this. It was not the kind of Sunday lunch one is used to, being outside and cold and not involving a decent glass of wine. In fact the cold ensured we ate up, got up and moved on, crossing the bridge at Goring and once again leaving the Thames Path for a trek along the Wallingford Road, past Moulsford Prep School before returning once again to the muddy path by the river.

Goring proved to be the last we saw of “civilisation” as we continued our muddy trek. After 15 miles, and just a mile outside Cholsey, our merry party split as one party left to get back to London for various personal commitments. Three hardy walkers remained and for another hour we quite literally trudged along the river bank before we too turned for Cholsey and the train back to Reading having completed a satisfying, but tiring, 18 miles.

Little did we know as we walked past Goring that our accountant, Jamie Burnett, lay seriously ill at home and passed away a few days later. We did not know the extent of his illness and our thoughts are with his family and colleagues at this difficult time.