Hector. Enough said. Warnings arrived overnight from friends and family. On BBC Breakfast telly the second top news story was how Storm Hector was going to rip through the UK; airports and bridges were already closing. 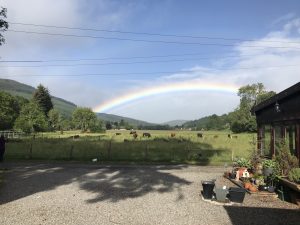 We awoke to an almost perfect rainbow; an arc of colour in the sky neatly crossing the valley our B&B was nestling in. Not a bad start. It didn’t last. 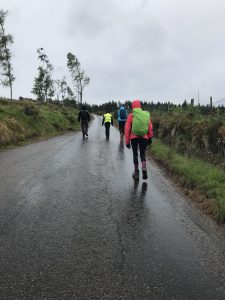 We started our walk today outside Drumnadrochit and immediately climbed 270 metres. As we broke clear from a forested part of the Great Glen Way, which we were again following, and on to open road the heavens opened (as predicted). There followed a minor halt to don waterproof bottoms (and a poncho) before we started a long trudge along a road following the mighty Loch Ness.  Wet and windy, although thankfully, as we entered more forest, mostly sheltered from the high gusting winds of Hector.

We had agreed to meet our Van Man at Invermoriston to drop off our guest walkers (Werner and Kira Pfaffenberger) which we managed after 14.7 miles without much of a break. We had good lunch break in a car park before setting off and realising we had missed the chance to sit on the beautiful bridge built by Thomas Telford in 1813 (see picture). 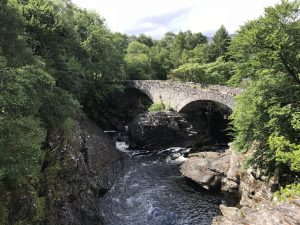 We left lunch knowing we had to cover 7 miles and made good time. The Great Glen Way splits between high and low routes at several points between Drumnadrochit and Fort Augustus. We decided to stick to the low routes based on the high winds we could see pounding the tops of the trees. As you can see from the pictures there were some casualties from the storm. Our path was littered with branches and the new tips of fir trees. The picture shows a tree that was clearly weakened as a result of being left after a massive tree clearance. 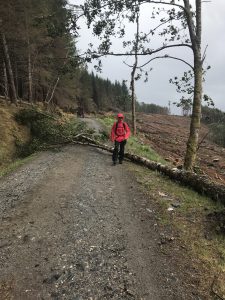 Day 6 was almost religious. Biblical weather, altitude (total gain of 2,500 feet) and this amazing loch that we spent most of the day ignoring.

A special mention to Angela who we met on the trail and who stopped for a chat. We have no idea where she was heading after Drumnadrochit but we wish her luck.

Finally, a big thank you to everyone who has made a donation so far. We especially wanted to mention Eddie the scientist who we saw two days running. Good luck Eddie!

Tomorrow we will go through 1,000 total miles walked by all walkers and we are now 20% done!