Day 5, one sixth of the way. After a night in surprisingly good rooms at Wetherspoons King’s Highway hotel in Inverness we decided to breakfast at a café in Inverness. For some reason cafes serving breakfast don’t open until 8 am. The first café, highly recommended online, told us at 7:58 that they were not ready for customers yet and we would have a 15 minute wait. So that was 9 covers on a slow Wednesday morning walking away. Hey ho. This turned out to be a lucky break as we had a wonderful breakfast at Coffee Affair instead: www.coffee-affair.net!

The walk out of Inverness on the Great Glen Way (www.highland.gov.uk/ggw), which we were to spend all day on, was stunning. Majestic Victorian (we assumed) riverside houses, the wide, shallow River Ness, with small bridges crossing between islands, lush vegetation and a well-marked and well-laid path. A walker’s paradise. 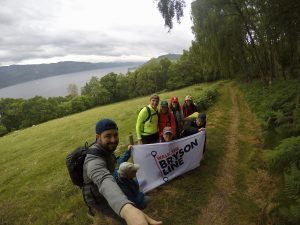 The Great Glen Way does not follow Loch Ness so we spent the morning leaving Inverness behind us and climbing into hills to the North West of the great Loch. This meant that we did not see the Loch until 7 hours into our hike but it did mean we had plenty of time for conversation with some new walkers who had joined us on the trail. 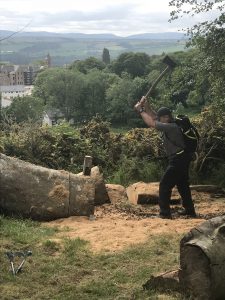 Early on, as we climbed into the hills we came across a felled tree that had been cut up and which someone had been chopping with an axe which they had (carelessly?) left with the wood. Roger, our guide and leader, did not need a second opportunity to demonstrate to the team how to swing said axe and split some wood. Our very own Paul Bunyam!

This is as good a time as any to segue into a feature on some of the people who have been heavily involved with the Bryson Line. Roger, a client of Tanager, was very interested in being involved with the Line once he was told what we were planning.  Close to achieving the British Summer Mountain Leader Award, his skills and training have already ‘saved the day’ at many critical moments. If we make it to Bognor Regis, it will be in large part thanks to Roger.

After lunch we came across the only cafe we had seen on the trail. The Abriachan Eco-Campsite and Cafe was a curious place. The first sign of the cafe are painted signs on the trail. Some of our group needed a comfort break and wanted to refill their coffee flask and were delighted to find Squeak the pig roaming the cafe grounds. What a wonderful place. 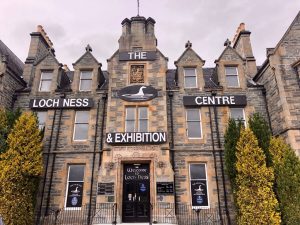 We finished our walk at the Loch Ness Centre in Drumnadrochit. No sightings of Nessie yet.