We had a very pleasant evening in the MacDonald Cardrona Hotel outside Innerleithen. Very well-appointed rooms, awesome shower, good full Scottish breakfast. The only problem was that it rained most of the night and we awoke to a steady drizzle that continued as we parked at our allotted start point.

Suitably attired in waterproofs we set off along the road soon passing Traquair House which, according to its marketing, is “Scotland’s Oldest Inhabited House. Visited by 27 Scottish Kings and Queens Traquair dates back to 1107 and has been lived in by the Stuart family since 1491.” Sadly, we didn’t have time to drop by but if you are interested you can learn more at https://www.traquair.co.uk/.

We turned off the road to begin our biggest climb so far on the Line. 530’ish odd metres straight up from the lane where we were warned that the cats were slow (see picture). We are now used to walking uphill; most of Scotland seems to involve walking uphill. However, we were not prepared for the drover road we were now following (the South Uplands Way) to involve so many downs and ups.

For the next five hours we trudged, in mist/fog (who knows) down 100-150 metres and then back up another 100 or so metres. Sadly, no views for us, although we could tell that they would have been stunning based on how high we were.

Our highlight was three stone cairns we came across at the last highpoint on this part of the walk. Called the Three Brethren they represent the meeting point of the Buccleuch Estate, Yair Estate and Selkirk Burgh. 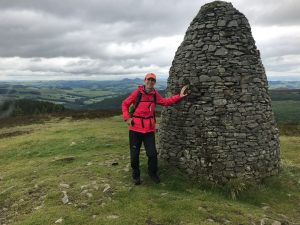 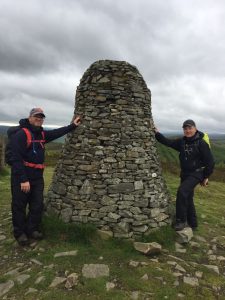 Thankfully we descended from this high point towards Selkirk and stopped for lunch on a memorial bench jsut outside the old town which bore the following inscription:

Despite much research on Google we cannot find out any more about Kirsty. Her bench was a wonderful place to stop with a wonderful view and, if you can open the video, a great 2-minute cameo from the local farmer, his three sheepdogs, and the star of the show, his sheep. Bless you Kirsty Jean MacAskill whoever you were.

Lunch was a bit later and very much welcomed. The energy boost put a spring in our step as we climbed up through Selkirk and into the farming country beyond. With less than 7 miles to go we put our heads down and made our rendezvous with van man on time at 6 pm. 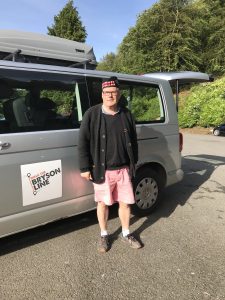 Although this did include one last climb of 340 metres which we managed without breaking stride having a fantastic view of Bowhill House. 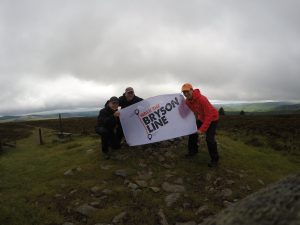