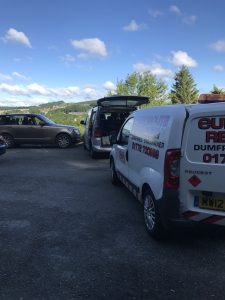 Day 12A, the longest day of the year, started inauspiciously. After a good breakfast at the Mansfield House Hotel, Hawick, and with the team in good spirits and looking forward to their second day on the Line as a threesome, we got in to the van to find that the battery was flat. We had a 45-minute drive south to our start point at Byrness, three miles over the border in Northumberland and it looked like we weren’t going far.  As luck would have it the lovely Sarah, who was looking after us at breakfast, had some jump leads in her car. We quickly hooked her car up to the van but found that the leads were not thick enough to carry enough power to the van. The owner of the hotel then tried his Landrover, however we had the same problem. In the meantime, Van Man had called the AA and our rescue man soon arrived with proper cables and the van was started.

We set off only an hour behind schedule. 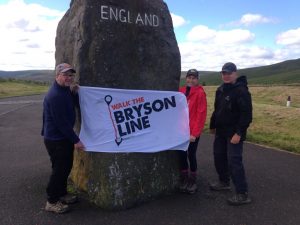 We crossed the border at Carter Bar and soon after were at Byrness and our start point at the edge of the Kielder Forest. After a mile or so of gentle walking we crossed a river and found ourselves on the Pennine Way.

There followed 6 miles of walking a well laid track through a pine forest which included a sighting of a red squirrel, something I have never seen. Cute.

After a lot of climbing (around 350 metres) we were directed left. At the signpost we bumped into Ian from Durham who was walking the Pennine Way. Ian was kind enough to warn us of the boggy path ahead and offered us some instruction on how to avoid a large tract of said bog.  It was only after a good mile of jumping from grass hump to grass hump that we finally took Ian’s advice and got over the barbed wire fence to walk on some “normal” ground – by normal I mean not wet, but it was by no means level. It was during this part of our walk that we witnessed the grace, pace and guile of our very own Queen of the Bogs – Kate Hedges. Kate, having walked in Northumberland before, explained that she had been advised to run through bogs – the only sure-fire way to cross marshy ground. And boy did she run as Roger and I picked our way gingerly through the tussocks.

At this point we were fairy disillusioned about the Pennine Way. The bog gave way to a steep climb down which included negotiating a couple of fallen pine trees and head high bracken. Thankfully, once we had got through this and after another long climb we were onto the open moor which was, quite frankly, stunning. Big sky, 360-degree views, clouds scudding across the blue sky. We stopped for lunch at the top of a hill, our backs against a gate and just lapped this up. 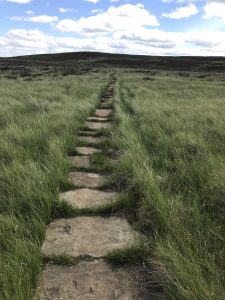 The walking from here, whilst not challenging vertically, was difficult, not least because the path kept disappearing. We were not sure if this was because we were, as usual, going in a different direction to everyone else (south), or simply because it was poorly marked.  As a result, three times we found ourselves off course and had to “bushwhack” our way back to the path through heather, long grass and moss. Thank goodness for GPS!

The last couple of miles into Bellingham were truly delightful. English countryside at its best: picturesque farms and farmland, winding roads in the distance and a cooling breeze. What more could one want? Well, a pint of Tyneside Blonde at our destination, the Cheviot Hotel!