After a raucous 20 people yesterday, we returned to a more sedate five today. Whilst not the hottest day so far, the humidity meant that it was a more difficult day altogether. We returned to our finishing point yesterday for the start of today’s walk, getting back on Shakespeare’s Way at Cherington, a beautiful south Warwickshire village where every property is constructed using the wonderful yellow Cotswold stone, even new builds. This really defines the area; it is hard to explain, however every property really is built of this yellow stone. 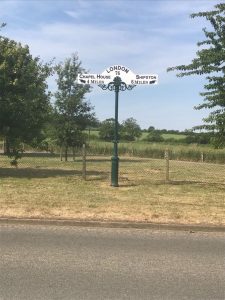 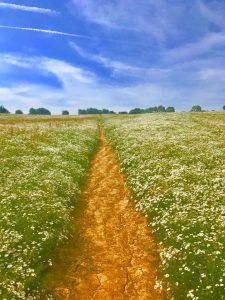 Once we had cleared a couple fields of cows (much more aggressive down south) we had a steady climb up over 100 metres which felt like a speed bump to those of us who had trekked down from Scotland and the North of England. We traversed fields of barley, wheat, rye, oil seed rape and broad beans, plus a few left fallow. Mostly the paths were well marked and cut back although we had a few where we had to navigate our arch enemies (for the short wearers): nettles and brambles. 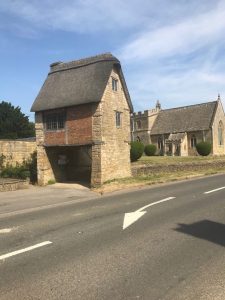 Early in the walk we passed through Long Compton, a charming village with, based on the village noticeboard, a thriving community. Here we saw a wonderful church with a rare timbered brick and thatch lych gate.We also came across and visited the wonderful local shop manned by an elderly gentleman in braces who was smoking inside his shop!

We had agreed to pick up lunch in Chipping Norton and after a quick toilet break we headed back out into the countryside to find somewhere shady for lunch. 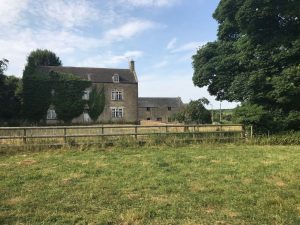 This turned out to be in a field, our backs to a gate and with a lovely breeze cooling our tired bodies. Behind us a dilapidated farmhouse stood, ivy-covered; we could not tell if it was occupied and, given its location, we all dreamed of owning a renovated farmhouse in the Cotswolds!

Interestingly, Shakespeare’s Way, after Chipping Norton, follows a route called the d’Arcy Dalton Way which was devised with help from CPRE, one of the charities we are supporting. 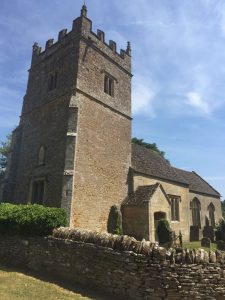 It is named after the late Col. W. P. d’Arcy Dalton who worked for over half a century to preserve rights of way in Oxfordshire. It links four major paths that cross Oxfordshire: Oxford Canal Walk, Oxfordshire Way, Thames Path and Ridgeway, following roughly the western boundary of Oxfordshire in unspoilt countryside. 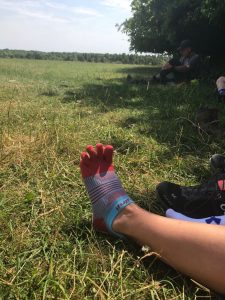 Two changes to our normal routine today. Firstly, we decided that, rather than walk to the agreed end point, we would change our route and circle back to Chipping Norton where we are staying. This was mainly to give Van Man a break from having to track us down in random locations at the end of the day for which he was very grateful.

Our second change was a surprise. Two friends from home had sons playing district cricket at Banbury and they decided to pop their bikes on the car and, once the boys had been dropped off, drive to Chipping Norton and cycle back up the path to find us. Not only was this just a wonderful thing to do, they also brought ice cream in a cold bag!! Hugely thoughtful and fantastic break in our routine. 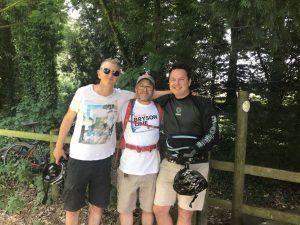 Thank you, Steve and Hugo, a great memory for which all the walkers are grateful.

Another great day on the Line! 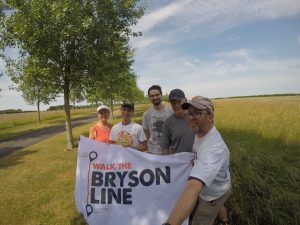