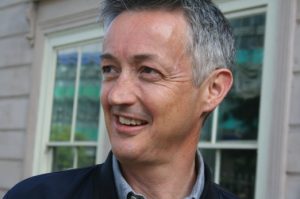 This is the latest column from Crispin Truman, the CEO of the Campaign to Protect Rural England, in the current edition of The Countryman

In last month’s column, I noted Bill Bryson’s important role in our ten-year campaign for a Deposit Return System. So I’m delighted that CPRE is now to be a beneficiary of a fundraising walk inspired by him. The ‘Bryson Line’ was Bill’s attempt to chart the furthest one can travel in a straight line in the UK, without crossing salt water – or, Cape Wrath to Bognor Regis.

A team of Bill’s fellow American anglophiles from Tanager Wealth Management have decided to use this imaginary line as a focus for raising £100,000 for CPRE and four health charities.

From 9th June to 8th July, they will walk 569 miles (equivalent to the length of the line), tackling some of the toughest terrain this small island can provide. And because the best countryside walks are those that deviate from the plan, this one will use the Bryson Line as a jumping-off point for exploring some of our less-heralded scenes – like the view of the Lune aqueduct from the Lancaster Canal, and the rolling Warwickshire farmland of Shakespeare’s Way. It will also take in ‘enhanced’ old favourites such as the South Downs Way – enjoying National Park protection since 2011; and the Devil’s Punchbowl – restored to blissful tranquillity since the A3 was put through the Hindhead tunnel the same year.

The CPRE network will be out in force along the way, raising awareness of the work that has gone into creating and protecting these landscapes. In return, we are looking forward to hearing how this enthusiastic bunch of Americans see rural England; as Bill has proved, ‘foreigners’ often have a keener appreciation of a landscape that – as he has shown us – is the most ‘handmade’, accessible, diverse and historic in the world.

If only more people in this country (and particularly our politicians) realised what Tanager founder Jeff Hedges has come to understand: that the countryside is “the British nation’s most glorious achievement”.

Be sure to follow our updates at www.cpre.org.uk and do keep an eye out for Tanager’s walkers. Visit www.thebrysonline.com for more on the route and how to donate.