Last Saturday I ventured out alone for a long walk. It was 3 degrees, drizzling and foggy. Just how we expect Scotland to be in June!

The walk I was following was 14 miles around Haslemere, starting at the Devil’s Punchbowl and heading East, round the North of Haslemere, through Grayswood, up onto Blackdown Common and then heading back to Hindhead via the centre of Haslemere. Thanks to Fancy Free Walks for the fantastic directions.  I added four miles as I set out from and returned home in Beacon Hill.

Sadly, the fog and drizzle prevented me seeing some wonderful views across the plain between the North and South Dow 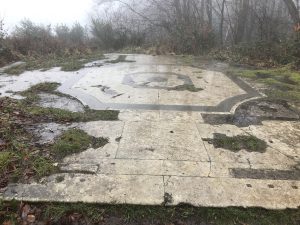 ns. However, as aways when walking cross country, I came across a number of curiosities. Take the remains of an early 20th Century hunting lodge, formerly part of the Witley Estate, now owned by the National Trust. All that remains is the floor but the view (what I could see of it) was exceptional. I then walked past a 16th century farm house and outbuildings – this area was thee the centre of the iron industry at that time. 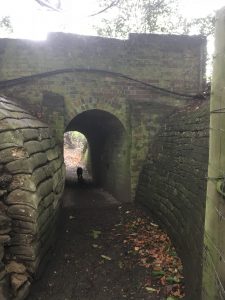 Then there was this lovely bridge crossing the path – I could not discern where it was going or what purpose it was serving other than as a good photo opportunity for Smudge (well sort). Not unusually for a decent length walk we crossed a railway line (twice). What was unusual was that the first time we actually had to cross the tracks. Despite there clearly not being an approaching train in either direction there was still a fizzle of excitement as Smudge and I trotted across the rails.

Given the conditions (wet, muddy) the going was quite hard. Slippery, soggy paths make you work harder to balance and keep a decent pace. Smudge didn’t seem to mind though.  Our halfway point was The Temple of the Winds at the top of the Black Down hills.

This was once a haunt and favourite place of Alfred Lord Tennyson and on a good day (as you can see from the picture here) the view is quite simply stunning. However (as you can see from the accompanying picture) today there was simply no view.  We stopped here for a chocolate bar and a handful of biscuits for Smudge.I had walked 9 miles, I reckon Smudge was on 15 at this point! 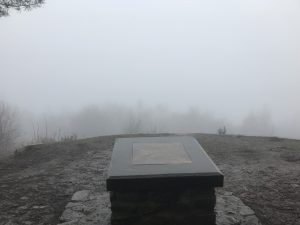 We set off on the second half of our walk refreshed. More muddy paths, thankfully mostly downhill and then crossing Valewood Park, a lovely, gently sloping common, then one long climb up Stedland Hill (phew) and then we were into Haslemere (note the curious green post box – never seen one of those before). 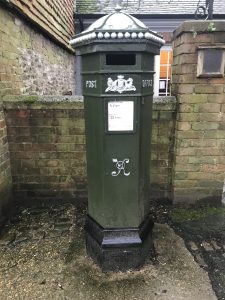 Passing quickly through the town we followed the path through alleyways, past a church and then steeply upwards towards Hindhead. I ended up climbing 2,500 feet on this walk (and I felt it later). Once we reached Hindhead we had a one mile shuffle downhill to get home. I think it may have actually started snowing at this point but I really didn’t care.

This was a sobering training walk. Alone and only achieving 18 miles (our average mileage will be 19 miles) really made me realise that we have so much to do before June 9th. It also gave me plenty of time to reflect on the good causes we are supporting and which I hope you will support too by sponsoring us on our adventure.  Alex Eichhorn