Phew What a Scorcher

Oh what a night. Circumstances dictated that we spent last night in a Days Inn, just off the M6 near Kendal. A few of us drove into Kendal (beautiful lakes town) for dinner and then back to our service station motel for a glass of wine sat on McDonald’s chairs by a reservoir. This was made the more enjoyable by the return of Eric, Dave and Angela to our happy team of walkers.

An interesting service station breakfast the next morning prepared the team for a short drive to the start of the Lancaster Canal. What we discovered was that this was the start of the renovation work to restore large tracts of the canal. Again, the Great British Volunteer was at work, digging out the old canal and restoring the banks. 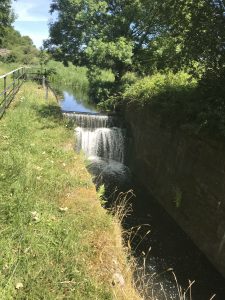 At our designated start point we were met by Gill and Tony Raikes.  Gill is the CEO of the Royal Brompton and Harefield Hospitals Charity. Tony was nominated to walk the first half of the day with us with Gill meeting us later to see us home. Tony proved to be a knowledgeable walking companion having trained as a British Mountain Guide and was a veritable font of knowledge pointing out local wildlife and reminiscing on his time growing up in Lancashire. 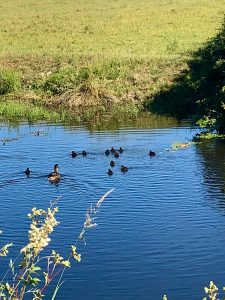 We strolled along the banks of the canal for several miles, criss-crossing the M6 until we finally came to the start of the navigable canal. During this early part of our walk we saw multiple sets of cygnets and ducklings, like us enjoying the fine weather. With no tarmac to reflect the heat and plenty of shade along the way we made good time, moving along at more than 3 mph. 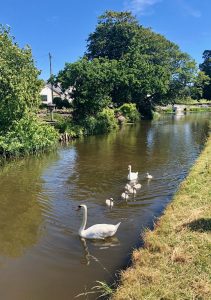 Having had to cross the M6 twice as the old (reclaimed) canal passed under the road it was a relief to catch up with the navigable canal. As we stood, catching our breath, we were passed by a couple walking 5 dogs, two of which were “tea cup” Yorkies, panting in the heat but still wagging tails.

The walk became more social as we started passing narrowboats and dog walkers. We decided to stop to eat our packed lunch at The Canal Turn, a pub in Carnforth, where we were meeting Gill who was taking over from Tony. After a brief stop for a sandwich (and some cheeky pints) followed by ice cream (thank you Gill!) we set off on the home straight to Hest Bank just outside Lancaster. 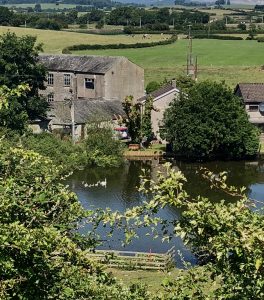 Gill brought a welcome wave of enthusiasm and joie de vivre that was very welcome on such a hot day. It was great to be able to spend time with someone with such knowledge and experience of the charity sector and who is doing so much to help the Royal Brompton raise vital funds for new equipment. 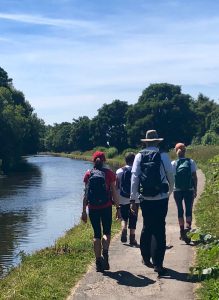 One moment of note was meeting 84 year old Horace, or Hungry Horace as he told us his friends called us. He was out for an afternoon stroll and when asked if he was local told us, no he was not, and that the locals called him a pie-eater. To learn more about why this is please check out this link: https://www.urbandictionary.com/define.php?term=pie-eater

We finished the day in another pub, which is not our usual practice. However, given the weather and the wonderful company it felt appropriate to settle down in the shade of a pub parasol with a drink. Massive thanks to Gill and Tony for joining us and brightening our day. 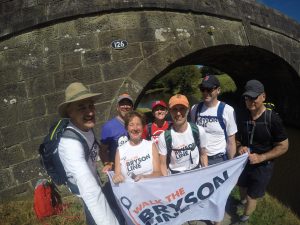