Yesterday, once we had finished, we were whisked away by Van Man to Temple Sowerby and the Kings Head Inn. This morning, after a tearful goodbye to my wife and kids (thank you so much for coming to see us – it was a real morale boost), we were transferred to Little Ashby on the edge of the Dales to start a planned 17.9 mile walk to Sedbergh on the Dales High Way.

The weather was already beautiful; warm, clear skies and a 0% chance of rain (I was sceptical so still packed my wet weather gear). Eric, the Architect, had re-joined us after a torrid, rain-delayed, journey from London, via an overnight stop in Darlington. 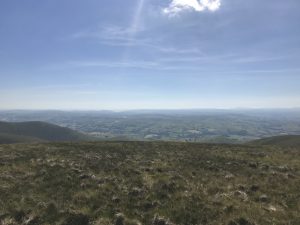 Our morning was spent walking up through archetypal hill farms as we ascended to about 250 metres. Once we were clear of the farms we came out onto clear open ground and kept climbing. As we reached the top a plain opened out below us with another range of hills in the distance our eventual destination. We found out that this plain was Tarn Moor, an expanse of heathland that was too sandy for farming but was very beneficial for local wildlife.

We crossed the Coast to Coast path here and after a couple of more miles we stopped for lunch in an idyllic hamlet called Bowderdale, sat under a tree by a babbling brook. Slightly ruined by a buzz saw and the difficulty we all had standing up after lunch.

With half the walk complete we set off after lunch and started climbing. Each peak we reached revealed another, which entailed a walk down and then another climb. Over the next three hours and 6 miles we climbed: 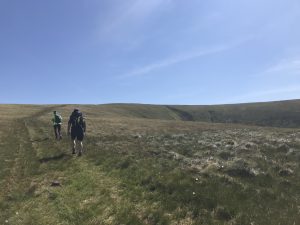 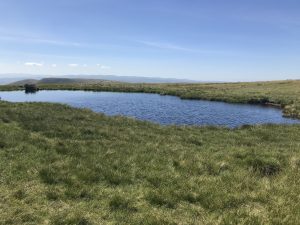 In the distance we could see the famous Lakes, shimmering in the fierce sunlight. Small consolation for us. This was tough. Not only were we climbing between dips but the sun was shining and there was minimal wind. 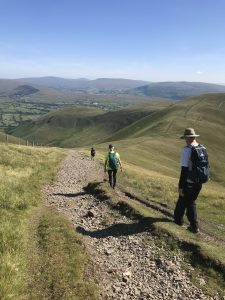 Eventually, after what seemed an eternity we began a slow, two-mile descent to Sedbergh (famous for its public school which Will Carling, former England rugby captain, attended) and where Van Man was waiting. 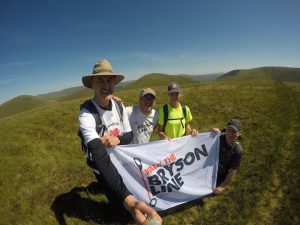