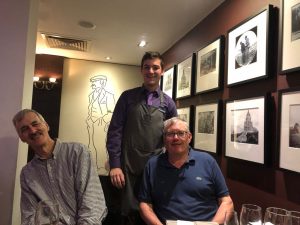 We left Lancaster around 8:30 after a very comfortable evening in the Lancaster House Hotel. A few of us made use of the pool and sauna to soothe tired and sore limbs. Dinner was lovely, made all the more interesting by the “best waiter in the hotel”, Jack, (see picture) who really looked after us. Thanks Jack!

Our walk started in the car park of a well-known supermarket chain where we picked up lunch and supplies. It took an hour or so to walk along the canal through the city before we hit the countryside. Walking along a canal means you don’t really get to see much of the surrounding countryside so my, and Eric’s, focus shifted to bridges. It soon occurred to us (having walked past 40+ bridges yesterday) that no one bridge was quite the same. We are not experts in the descriptive language required to properly describe how bridges are constructed, but we had enough experience to decide that a balustrade on top, or a decorative arch made for a more interesting bridge. We soon realised that the style of bridge depended very much on what it was being used for. 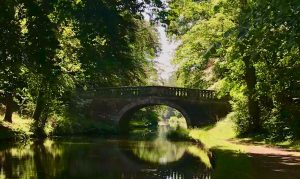 Private roads/drives were very different from public roads, yet we still a lot of variation for what we termed the “bog standard” bridge – essentially constructed of large stone blocks over an arch. We also found it amazing that bridges did not appear to be built to any one formula which made for a wide variety of styles. Don’t get us started on aquaducts or viaducts.

With nothing much else to look at we sauntered along at a good pace, yet conscious of the wear and tear on our feet. 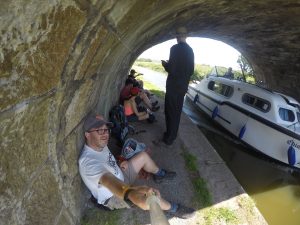 We lunched early (for us) after 10 miles and probably for the first time on the Walk we opted for necessity over comfort, convenience or just the view. Put simply, we stopped under a bridge in delicious cool shade. Up to that point no alternatives had shown themselves, but of course, once we continued walking we came across the most perfect, shady spot. Hey ho!

Meanwhile, on the canal, life went on. Boats cruised past us, although not as many as we were expecting to see on such a beautiful canal on such a wonderful (weather) day.  Bugs bothered us. A lot. We had been warned about the midges in Scotland but, by luck rather than design, the wind had been strong enough to ensure we were not bothered. However, here, down south (from a Scottish perspective) some of my American chums were being devoured by gnats, flies and god knows what.

The morning walk was unusual in that we did not see much farming. Of course, the wildlife continued to amaze us with more ducklings, goslings and cygnets as well as a healthy dose of mayflies. 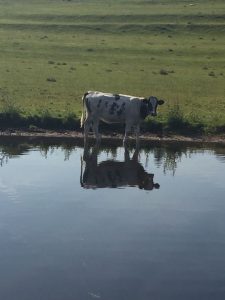 But it was the cows who stole the show today. We saw a lot less of our bovine friends than we have in the past 17 days but when we saw them today we saw a variety of lessons on how to drink from or stand in water from the canal. After many miles of mindless marching this provided much mirth. This might be hard to translate through our pictures… 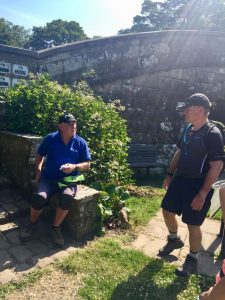 We also met our Great British Volunteer for the day. Sadly, we did not get his name. What we do know is that he was cleaning up bridge number 1 on a branch off the Lancaster Canal and that he was volunteering for the Canal & River Trust. Where would this country be without volunteers?

We finished our walk in a Garden Centre, greedily rushing for the chilled drinks section in their shop. Tomorrow we head back to the Pennine Way and, we hope, a breeze. 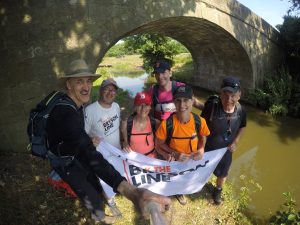