We were split up last night. Necessity required that we had a 5:2 split between a pub hotel and a B&B – the Waltzing Weasel.  As a result, your author was treated to a fantastic Chinese at The Grouse pub in Birch Vale by his sister in law, Chelsy, who joined us for Days 19 and 20. The rest of the team enjoyed traditional pub fayre and an early night at the Lantern Inn.

Day 20 promised much; one of the shortest days on the Line, climbing up over 650 metres and over Kinder Scout to the end of the Pennine Way with another good weather forecast. As usual with the Bryson Line, something was bound to happen, and it did.

After a very, some would say the most aggressive, climb of the Walk, straight up 350 metres on an uneven, rocky path we found ourselves back up high on the Pennine Way with Saddleworth Moor still burning in the distance. Disturbingly, the white smoke was now black and thankfully still blowing away from us. It was at this point that the Pennine Way on our map decided to take a different course.

As we stood around looking for the path a wonderful local man (we assume) arrived to ask if we were lost (to some consternation on our part).This 72-year-old was out for a morning run, high up on the moor, miles from anywhere. He confidently told us to ignore the map, it was wrong. We had to work our way across country (at this point dried out bog, heather and stones) to a pile of rocks and turn left there. And he was right! 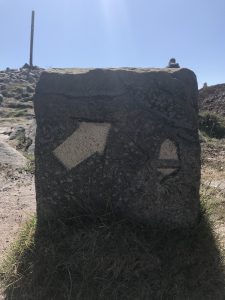 Set straight we carried on under a much hotter sun than yesterday and much less wind. After a few miles of working our way across uneven paths, littered with stones, and making slow progress, we finally came across the much talked about flagstones and set off on a burst of speed to make up some time before we stopped for lunch.

We took lunch at the top of Mill Hill next to a cairn in full sight of our next objective, Kinder Scout.

Kinder Scout is well known as being the location where a large number of walkers trespassed in 1932 to secure the rights to access open country.

Without these people we would not have been able to Walk the Bryson Line – so thank you!

It took us a couple of hours to negotiate the rocky ridges of Kinder Scout before we came to Jacobs Ladder – a long, difficult descent towards Upper Booth which had become our final destination today due to events out of our control.

As we marched towards lunch Kate got a call from Van Man who told us that our hotel tonight had had to close due to it having no water. Our original plan, to finish in Edale and drive an hour to our next hotel before another 45-minute drive to the start tomorrow in Balsall Common, was kaput. Thankfully, Van Man waved his magic wand and secured us lodgings in Balsall Common. All was well.

After a foot and calf-achingly difficult descent on Jacobs Ladder we arrived at the meeting point, happy to finish relatively early and set off in the van for Warwickshire.  We made a good start until, after filling up and just 45 minutes in, we ran into a proper traffic jam. And we sat still; for an hour. In traffic. Dirty, tired and thirsty.  Eventually we got through in time for a late dinner at our start point for tomorrow. 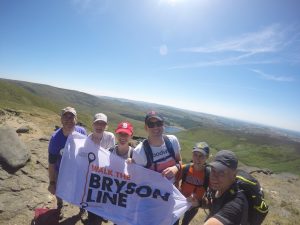