After another evening of swim, sauna and dinner at the Mercure Norton Grange in Rochdale we awoke to news that the fire on Saddleworth Moor had worsened. All of the walkers received messages from friends and families asking if we were close by and were we OK.

As it turns out we were close by, but thankfully not close enough to be directly impacted by the blaze, although it did explain the layer of dust/ash on the outdoor furniture at our hotel.  We were dropped off on the Pennine Way just outside of Littleborough and after a climb up to over 400 metres it soon became clear that what we assumed to be smog over the Manchester urban conurbations was in fact smoke.

If you look carefully at the pictures in the blog today you will see what looks like a line of cloud but which is actually smoke. Late in the morning we crossed from Lancashire into Yorkshire and passed a sign indicating we were in Saddleworth although we could see that the fires were still some way away.

We were walking on another lovely day, but whereas yesterday we were trapped by a canal with little or no wind, up on the moors we were blessed with a cooling breeze, making our walking extremely enjoyable. Back on the Pennine Way we walked on good paths, some paved, and many clearly dry and which would have been boggy a week or so ago. We were lucky, though – if the wind had shifted we would have been walking in smoke…..

Shortly after crossing the M62 (quite odd that, walking some 50 feet over the motorway with all the noise) we came across a burnt-out Range Rover. 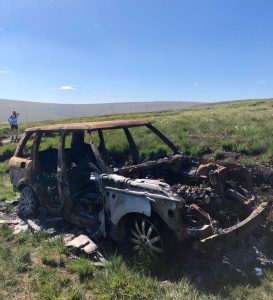 Although there were no notice boards providing a detailed history of the 4×4 we took it as some kind of tribute to off road driving. Another feature of this area was the number of reservoirs we walked past.  On a hot day, high up in the moors, it was hard to resist the temptation to strip down and dive into the cool (looking) waters.

We pushed on and had a late lunch after 12 miles around 2:30 with a lovely view of Wessenden Head Reservoir. 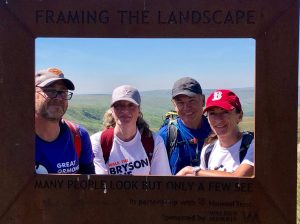 As we walked up to cross a road we came across a great idea which more beauty spots should adopt – a large metal picture frame encouraging visitors to take a picture of the view through the frame. A great idea.

On a sad note, we began to see rubbish creeping into the walk.

Other than a few roadsides in Scotland the Walk has been largely rubbish free, however we came across some serious fly tipping (prams, TVs, furniture) in a car park and increasingly plastic bottles, cans and wrappers. Such a shame.

With four miles to go we underwent the familiar joy of calling in to Van Man to say we would be with him in, say 1.5 hours only for the path to pay us back for our over confidence.

Today, having climbed up to over 650 metres our descent was slowed by a path that was never flat and wound up and down across ravines. It took us nearly 2.5 hours to cover the last 3 miles although it was good to note that during this afternoon we went through a landmark 2,000 total miles walked.

Tomorrow we will have completed 2/3 of the Walk. Bring it on. 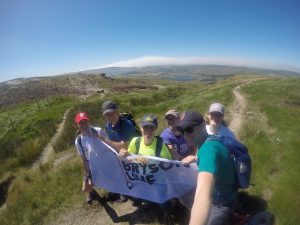 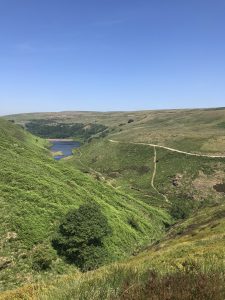