After our adventure yesterday evening we spent a restful night at Haig’s Hotel in Balsall Common.  We were very excited as we had Vanessa and her team from immigration law firm Ganguin Samartin (GS) joining us for our day’s walking.

As usual with the Bryson Line, nothing ran entirely to plan. Two of Vanessa’s colleagues missed the first train (leaving London sometime around 05:40) and were 10 minutes late. Not a problem. Once we had gathered all the GS team we dropped them at Ye Olde Saracen’s Head car park, our start point and where we had had a lovely dinner the evening before. Twenty minutes later and we were all in the car park, introducing ourselves and preparing for the planned 18.6 miles. Given the unusual, and quite frankly unwelcome, heat wave we have been experiencing, preparation now includes a thorough application of suntan lotion, extra water and a hat. 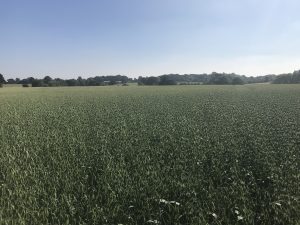 Our start meant picking up the Heart Of England Way which winds through middle England. Happy days as we crossed perfect farmed fields, through gates and over stiles.  After big climbs and huge descents, it was a pleasure to be on the flat.  W ell, that is if the flat is well looked after. 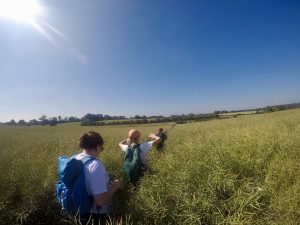 A few fields in and suddenly the path became overgrown, not just the field but also the stiles and gates in the hedges between fields. Suddenly shorts did not seem such a clever idea as nettles, brambles (briars) and grasses (allergies) began to take their toll. For 2-3 miles we trekked (yes trekked) across fields in this manner. 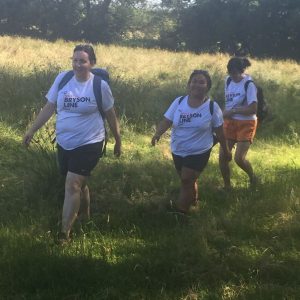 Eventually we found the Stratford and Avon canal. Bliss. Not only was the footpath straight and true but it was shaded! Unlike our walk a few days ago on the Lancaster canal where we strolled along a heat conductor with no wind, this was looking good.

It was at this stage that we stopped to talk to Louise of Lichfield Kindness Rocks who very kindly made a donation. This included a painted stone which we are under instruction to take to Bognor Regis.  I also stopped to talk to someone at a lock who asked me if I was with the “Zeppelins”. I nodded (in ignorance) and chatted for a few minutes before plucking up the courage to ask what a Zeppelin was. Looking at me confusedly he said” You know Led Zeppelin?” to which I replied, “Of course”.  He just said “Rambling On”. I nodded, and left, slightly embarrassed that he did not work out that my fellow walkers were all American and not at all part of Led Zeppelin….. 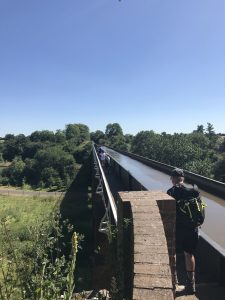 Once we were on the canal we eased into a great pace and found this canal to be extremely social. With many locks we had time to stop and talk to fellow travellers as they moved up or down the canal. It was so refreshing to meet people moving at a different pace and stop and chat about where they were going.

The canal itself, whilst unremarkable, was really enjoyable: until the shade disappeared. Yes. We had to cross the water and walk ON THE OTHER SIDE. It was hot. The last six miles were difficult but we all made it. Big shout out to the team from Ganguin Samartin: Vanessa, Maghan, Afshan, Roizza and Roberta. You were great and it was wonderful to have some new faces and conversation after 20 days on the Line! 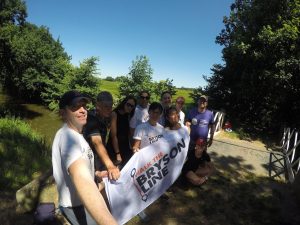