Oh What a Day!

We awoke to another glorious morning at the Shillingford Bridge Hotel. Sun shining and a wonderful view of the river at breakfast. I was despatched to Didcot to collect the Architect and five walkers from Plutus Wealth Management. 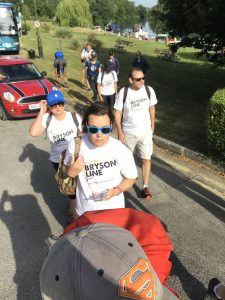 I returned to find our group had expanded to include my wonderful friends from home, Anthony and Benita.  At short notice, and due to busy work schedules, they had decided they could make today! I am not sure they were quite sure what they had let themselves in for but having run 60 km in 24 hours last year I was comfortable they would sail through Day 26.

We started at the beautiful Shillingford Bridge and set off down the Thames path. As usual we had to negotiate nettles and brambles at certain points which is always a challenge for new walkers. The Thames is England’s most iconic river and we were walking along, in our opinion, one of its most beautiful stretches.  The wide waterway wound lazily heading south and as we passed Wallingford we came across familiar territory: we had walked up from Reading in March on a training walk. We were relieved to find that the mud that had plagued the riverside paths was but a distant memory, however, their legacy remained as we walked on lumpy, cracked and hardened paths. 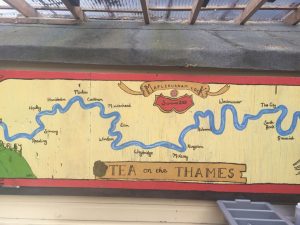 We made good progress towards our first rendezvous with accountants Mortimer Burnett in Goring. Carol, Tanager’s accountant, had promised us cake and so, at around midday we found ourselves winding past the late George Michael’s house to the Catherine Wheel pub. The pub garden was a veritable oasis of flowers, shady gazebos and comfortable seats. Our party of 13 took their rest as the wonderful team from Mortimer Burnett plied us with cake and drinks. We can honestly say that over the last 25 days we had not received such wonderful hospitality and we are eternally grateful to Carol and her team for the fantastic cakes. 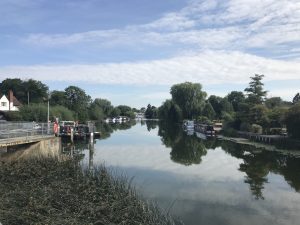 At this stage we were 8.5 miles into our walk and the refreshments were very gratefully received. After lunch as we strolled through a churchyard we came across a young lady relaxing. We were slightly surprised when she declared, as we walked past, that she was sitting on the “Most comfortable tombstone I have found”. Takes all sorts. 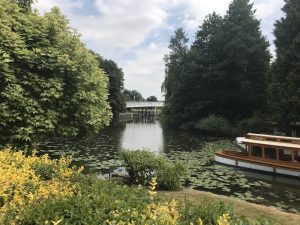 We had little elevation throughout the day, but we were walking one of the longest days of the Bryson Line at 21.5 miles (estimated). We pushed on and stopped for lunch in the shade of a tree at Pangbourne. I once played real tennis in Pangbourne and I enjoyed the memory as we relaxed in the shade watching young mothers picnicking with their children in the wonderful sunshine. This country really is fantastic when the sun comes out. 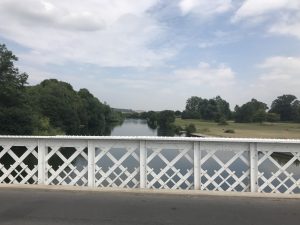 We set off after lunch, unusually with a long way (8.5 mile) still to go. So up we got and set off again. We only left the Thames twice, once to cut up and cross a toll bridge (one of only two left on the Thames) near Pangbourne and once to cross the railway line in the outskirts of Reading. 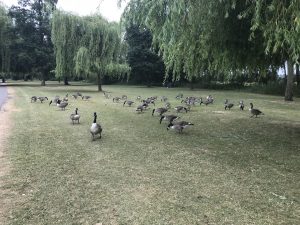 As we moved closer to Reading our path opened up into managed (as in council) land which was dominated by geese, ducks and swans. Clearly well fed, these birds were very 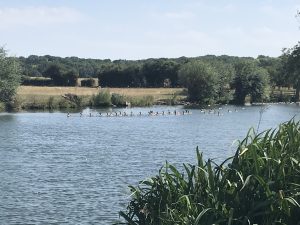 curious and continued to come up close to say hello hoping we would continue to provide their preferred diet of white bread. 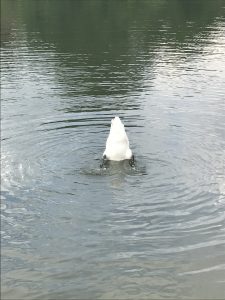 This diet seemed to promote the production of a lot of excrement, thankfully mostly by the river.

We made our hotel with everyone in one piece after about 56,000 steps according to our guide. The real numbers are below.  The core walkers were rather unimpressed with the lack of elevation so, despite the 22.5 miles, were a little put out.

Big thanks today to the team from Plutus, Anthony and Benita, Abbas from Tanager and Eric the Architect for raising our spirits, refusing to complain and being such wonderful company.  You really do not know what it means to 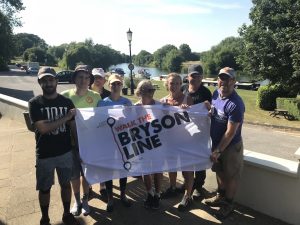 have you join us!