Day 27 started without an hotel breakfast. Quite frankly we were bored of the Full English (read Scottish, Highland or Northumberland as well) and many of the core walkers decided to hit up Starbucks over the road from our hotel, the Mercure in central Reading, for a strong coffee and a sandwich. It wasn’t quite the same but it did mean that we were able to make a quick and early exit to get to across reading to Arborfield, a few miles south of Reading. Well, actually a Londis in Arborfield. Nice.

Here we were to meet a cast of thousands. We had six (well five with one to come, more later) from Buzzacott Chartered Accountants together with our colleague Alastair, his mother and a family friend plus an old chum of the writer. The Architect had arranged for us to start outside a Londis in Arborfield, outside South Reading. Today’s group arrived by van, taxi and, surprisingly by bike.

As we prepared we were approached by two young children who wanted to know what we were doing based on the Bryson Line logo on our t-shirts. Big shout out to this charming couple whose mother gave us permission to publish their photo!

The cyclists were Marcia and Dennis who were going to join us for the first few miles. Marcia is an Ambassador for the Great Ormond Street Hospital for Sick Children.  Marcia, a wonderful lady, trained as a nurse at GOSH many years ago before a career in education. Following retirement, Marcia spends most of her time helping other people (as far afield as Malawi and Nepal). Marcia is another Great British Volunteer and it was jolly wonderful to spend time together on the line. Thank you Marcia, you are a gem.

We left Londis and were immediately flummoxed by the fact that a housing estate was sitting on our path. Can you imagine! 50 odd miles to go and we couldn’t find our way to the path. Eventually we made an executive decision to follow the road and join our path in a mile. Thanks to Dennis for the local knowledge.

Once we had corrected our route we made good progress to the California Country Park. The only connection to America was that the original owner, one Alfred Cartilage, wanted to establish an amusement park and zoo in the early thirties. Sadly, this early Disney theme park wannabee failed and the original park lay rotting in the undergrowth (which we could not see). We left Marcia and Dennis once we had walked through the park and set off for the Blackwater Valley via Sandhurst railway station where we were due to meet Trevor, our final guest from Buzzacott. 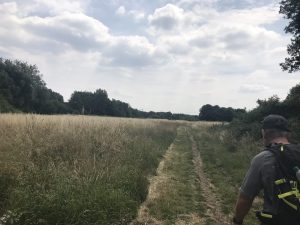 Our walk, already urban-orientated, and following the Blackwater Valley, became a dystopian stroll along a river and through fields bordered by a very busy road and a railway line. It was here that the core walkers really noticed the build-up of rubbish. Beer cans, plastic bottles, cigarette packs, etc. The familiar markers of paths near towns in the south.

We lunched in the midst of a business park with confused workers popping out for lunch and cigarette breaks taking in our Bryson Line t-shirts yet not being brave enough to stop and ask what we were doing.

Day 27 ended with a truly Brysonian moment, our path through some lakes barred by huge green fencing with locked gates. We were almost at our target distance and were all once again feeling the effects of walking in the heat so the decision was made to divert to a nearby pub to cool down. Here we met Mervyn who, spotting our t-shirts, came over to tell us that he and his sister were walking the English coastline using two weeks of holiday every year for the last 25 years! Nice one Mervyn. 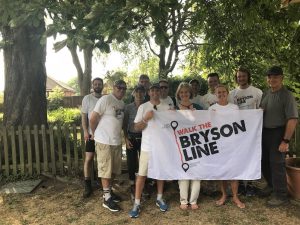